To check types of EC2 instances
http://ec2instances.info
g2 are GPU instances
and p2 are bad boys

Founding history and HQ
Cometchat was built by Inscripts, an IT services company founded in 2009 (India, Mumbai). Both services and product businesses are operational as of May 2016. HQ in Mumbai, India.

QuickBlox was built by Injoit, an IT services company founded in 2007 (Ukraine). It has fully transformed into a product company focusing on QuickBlox in 2013. The company does not operate services business anymore and is solely focused on QuickBlox platform which is funded by own revenues. HQ moved to London, UK in 2010.

StackOverflow N of discussions
(index of popularity among developers):
Cometchat: 114
QuickBlox: 2,522
QuickBlox has exceedingly more mentions on StackOverflow which is a sign of lively developers community and many use cases discussed around integration and customisation.

Production stats
(sorry I don’t have Cometchat stats so providing QuickBlox only):

– Web-first vs Mobile-first: CometChat is web-based and is being positioned as a chat solution for websites. Its mobile SDKs (iOS, Android) come secondary and are less developed.

QuickBlox has been mobile-first from day one (first built in 2009 were iOS and
Android SDK libraries) and has very powerful native SDKs for all mobile platforms
(iOS, Android, Windows, BlackBerry) along with Javascript for web. Numerous features QuickBlox has implemented natively for all popular platforms are simply not matched by any competition.

– Core messaging technology stack: CometChat uses long-polling which means users receive messages only when their client requests for them. QuickBlox uses XMPP which is a “true” messaging protocol also used by Whatsapp and many other messengers – meaning messages sent as soon as typed. This is also important for presence and signalling mechanisms. XMPP is very scalable and can support hundreds of thousands of users.

– “Web chat” vs “Messaging OS” architecture. CometChat was built as a chat plugin to web-sites. QuickBlox was built as a universal data backend initially competing with Parse etc and it is highly extensible and customiseable thanks to its powerful Users, Content, Custom Objects and Cloud Code APIs. Some customers use QuickBlox not for messaging, but for general data sync across numerous mobile devices, as platform works very well in that context. In 2011 QuickBlox added messaging (XMPP) now integrated with its Users and Custom Objects APIs. In 2013 QuickBlox added video calling and its native iOS WebRTC library is more efficient than official one from Google. Powerful Data + Communication modules form the so-called “Messaging OS” where you can build whatever you want, going low-level if needed.

– Plugin VS Stand-alone App. CometChat built as a plugin, QuickBlox focuses on a) providing a ready stand-alone messenger: http://q-municate.com, http://qm.quickblox.com with source codes available for iOS, Android, Javascript and also as a ChatViewController which includes messaging UI+logic for easy integration into existing apps: http://quickblox.com/developers/QuickBlox_Developers.

As a summary, I would say use CometChat if you want a chat window on your website. Use QuickBlox if you want a stand-alone web app or native mobile apps with functionality and visual appearance as seen in WhatsApp, Telegram and other state-of-the-art messaging platforms.

END_OF_DOCUMENT_TOKEN_TO_BE_REPLACED

It is a bold statement but it’s supported by Microsoft, Facebook, Slack and Telegram.
So you can almost say it’s a new reality. Which means new opportunities for all of us. Let’s dissect the issue of chat bots so you come prepared as the land grab is starting very soon. 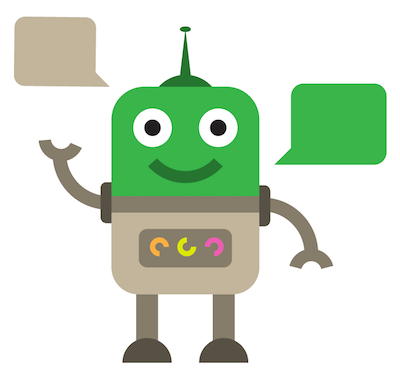 END_OF_DOCUMENT_TOKEN_TO_BE_REPLACED

So setting up a slack chat for your sales team is a good idea.

Next thing you want to do is add couple quick integrations. They ones I did:

so you can forward inbound leads from Gmail into Slack 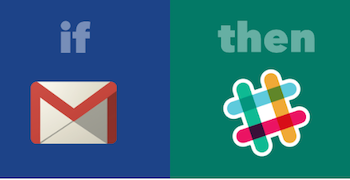 What remains to do is you set up a Filter in Gmail settings that applies a label (say “slack”) to e-mails generated by our lead generation (in our case a form prospects fill at our landing page).

Then use the IFTTT recipe above that posts all e-mails labeled “slack” to Slack.

Here you go – now you get inbound all into your slack chat: 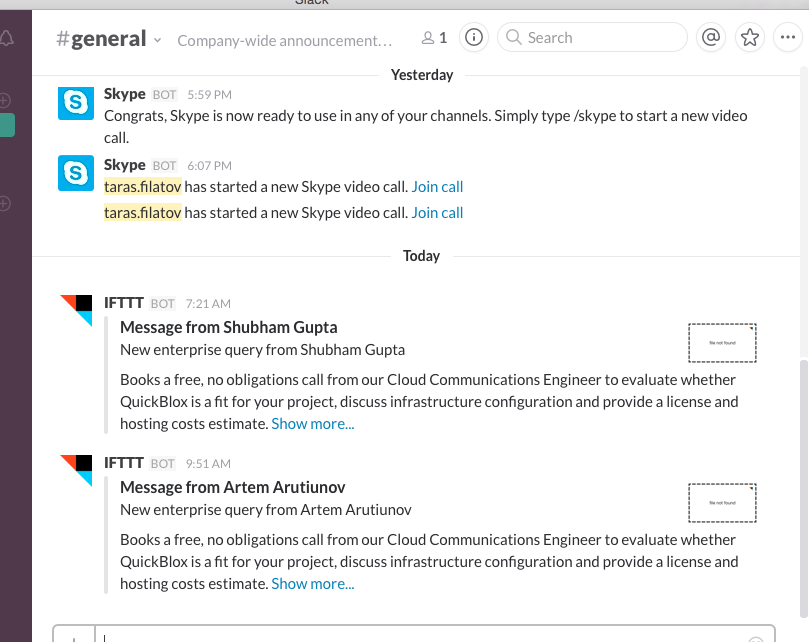 It’s nice you can see full message body once you click on “Show more” and respond to your leads faster this way.

This is very important. Average person doesn’t give a shit about space. Cold war rockets race is in the past so governments invest near to nothing. Legislation for commercial exploitation motivates businesses to start new era of exploration.

So you know what this means – mankind has just improved its scalability!

Super excited about this space 🙂

So wanted to share some thoughts on the latest trend, the “messaging OS”.
Not sure if you noticed or not but as my business currently heavily involves  OTT communication, I’m pretty sensitive to this stuff, also feels weird when something you’ve been telling your team and discussing internally suddenly becomes a topic of discussion on TechCrunch, in Mary Meeker reports etc.

END_OF_DOCUMENT_TOKEN_TO_BE_REPLACED

Basically information for future own reference.
There are a number of ways to convert your Erlang code into a stand-alone ‘app’ package containing whole OTP environment in it. Starting with standard systools and reltool. Some useful links below.

There are basically 2 kinds of erlang applications:
– the “pure erlang” way is to create a release including the runtime,
OTP and your application(s). Then a simple .bat script can launch the
runtime with the right options. reltool or systools are made for
creating these releases:
http://learnyousomeerlang.com/release-is-the-word
http://www.erlang.org/documentation/doc-1/apps/reltool/index.html
rebar can help you using these tools.
– for a single executable, not distributed, with a single app, you can
create an ‘escript’ from your code which will be launched as an
executable. rebar includes the escriptize command to achieve this.
As an example, you can look at the ‘averell’ web server which is built
that way:
https://github.com/jeanparpaillon/averell

So I’m just going to dump my experience here hoping it helps somebody.

This is Step 1 – making your Pi’s be able to ping each other and communicate via UDP/TCP, ad-hoc, peer to peer, without any central router. This doesn’t include making them route packets with 2 or more hops between origin and destination.

Long story short I’ve tried like a hundred different things and as usual a simple thing made it work.

So here it started as a weekend / hobby project trying to learn more about mesh networking and mesh communications. I’ve purchased 2 x Raspberry Pi 2 Model B (below) along with all standard stuff including usb Wi-Fi dongles and set sail with a goal of simply making them ping each other and eventually transfer a file in a mesh / ad-hoc network mode, basically so that none of them is an access point and both aren’t connected to any 3rd access point. 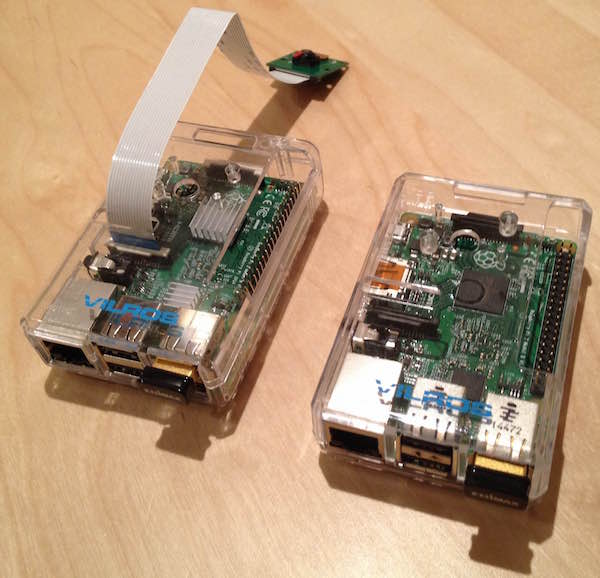 END_OF_DOCUMENT_TOKEN_TO_BE_REPLACED

I decided to start this blog as a central place to share all things around my professional interests such as building SaaS software and the related aspects of technology, marketing, team work and entrepreneurship in general.

Main thing is I’m going to write about things that both: (a) interest me; and (b) could be useful for others. My interests are quite chaotic in their diversity and include SaaS, mobile messaging (XMPP, WebRTC, SIP), mesh networks, product marketing, startup engineering, but also things such as space exploration, practical psychology,  computer vision, quantum mechanics, aikido and playing guitar.

The name idea basically comes from scalability (as in scalable software, scalable business) and rockabilly which is supposed to mean in this context we don’t only talk & do tech, but we also have fun along the way.

This is a personal blog, I write it in my personal time and all opinions are my own. I may reference some cases from projects and businesses I’m involved with for the benefit of both the reader and business/project in question. This platform allows covering certain aspects in better detail, something I won’t be able to do in a company/project blog due to format or other limitations. There will be no special effort devoted to staying more un-biased and objective than I am; this blog shall be treated as post-work musings of a guy who still thinks about work and may be biased (and certainly doesn’t mind more traffic and leads coming into his projects), but honestly wants to share some insights or maybe ask questions and initiate discussion to learn more from others.

It would be nice in future to build a discussion platform here where other authors could join and write posts, upload tutorials etc but we’ll see how it goes and if I’m able to maintain steady and useful publications in the first place.